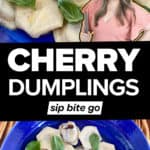 Wondering what to do with cherry dumplings? Today you’ll learn how to cook cherry vareniki dumplings from frozen or fresh and how to serve them in a Ukrainian / Russian style meal. Let’s whip it up…

What are sour cherry vareniki?

They are basically sour cherry filled dumplings similar to ravioli. Most people know them as Ukrainian cherry vareniki or Russian vareniki with cherries.

The cherry pierogies (as they’re also called) used in this recipe are frozen cherry vareniki from Kachka Portland, a restaurant that sells their famous Lavka dish ready made at New Seasons grocery store. I was so thrilled when I walked in and saw these dumplings pre-made. I didn’t think twice before buying them.

Ingredients to make this dish

This dish with cherry dumplings is made with…

How to make cherry vareniki dumplings into a dish

When dining at Kachka in Portland, I’ve had these same dumplings served pan fried. To finish them this way, add boiled dumplings to a frying pan with some butter and fry until they’re golden brown. The back of the Kachka package also recommends serving cherry dumplings with ice cream. Would you try that? I would!

Where to buy frozen cherry vareniki

You’ll have to look for premed cherry vareniki in local stores. I was so happy when I stepped into my local Oregon New Season’s and saw these frozen cherry vareniki from Katcha PDX, one of my favorite Portland lunch spots.

Can you make cherry pierogies from scratch?

Yes, you can make a basic vareniky dough and use fresh or frozen bing cherries (pitted of course). It is a more involved process, but you can make them in a large batch and freeze them.

How to make cherry dumplings from scratch

The gist of making vareniki dough is to start with sifted flour, knead the dough, whip out a rolling pin to make a thin sheet of pasta, cut out circles on a floured surface, stuff them with sour cherries, and seal them up. I skipped all that for this recipe and took a shortcut by buying them frozen pre-made but perhaps soon will post more from-scratch cherry vareniki recipes.

On the back of the Kachka Lavka package, they suggest using any fresh chopped herbs including basil, mint, and tarragon. I also recommend dill or parsley. In this recipe, the demonstration is with basil.

I think you’re going to love these sour cherry dumplings with sour cream and vinegar and basil. I know it may sound like a crazy flavor combination at first, but it totally works.

To see more of my favorite restaurant-style dishes, Portland lunch spots and features of the best restaurants in Portland, connect with me on Instagram @sipbitego. And for more deliciousness, subscribe to the Sip Bite Go channel and see the full Sip Bite Go recipe collection. 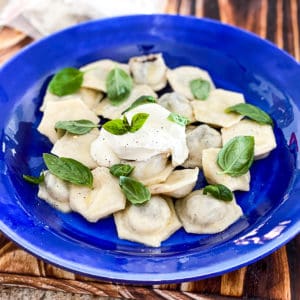 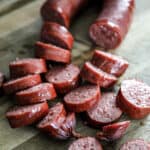 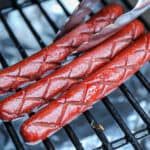 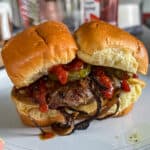 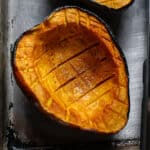 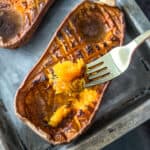 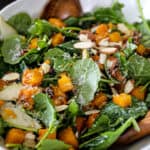 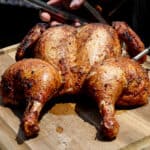