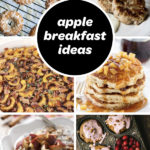 Apple picking is one of my favorite Fall activities. Once I come home with all the apples, I always want to make a million things. Here are some of my favorite apple breakfast recipes to enjoy the Fall harvest.

From sweet ideas (pancakes), to savory ideas (apple and pork sausage) and healthy options, too (apple and oatmeal recipe ideas), this list has everything you need to make delicious breakfasts this Fall.

Baked cinnamon apple doughnuts are tasty for little ones and adults alike. They have bites of real apples in them.

Get recipe at Jonesin For Taste

I love using grated apples in pancakes. It adds a hint of sweetness and is a great way to add fruit to breakfast for kids. See how to make apple pancakes.

Apple cinnamon pull apart bread has layers of bread with chunks of apples and a sprinkling of cinnamon and sugar between.  It’s an apple breakfast recipe made with firm Fuji, Braeburn, Granny Smith, or Gala apples. These crisp apples are great for baking.

Get recipe at Beyond The Chicken Coop

This apple pork breakfast sausage makes a typical breakfast feel more “Fall”. The apple adds a sweet taste that goes perfectly with the pork and sage. This apple and sausage recipe can easily be doubled to feed your hungry guests.

Get recipe at Beyond The Chicken Coop

Chai spice is typically made up of a blend of cardamom, cinnamon, and ginger that smells absolutely amazing. Chai spiced apple waffles are filled with little apple bites and wonderful chai spice for a wonderful way to wake up in the morning. This apple breakfast recipe is great if you have a homemade waffle maker.

Get recipe at Jonesin For Taste

Carrot apple cranberry muffins are packed with fall flavors and topped with a cranberry glaze. They make a delicious afternoon pick-me-up, or an easy apple breakfast recipe to take on the road. The muffins themselves can be whipped up in one bowl, and are fully vegan and gluten free.

Get recipe at Crowded Kitchen

Need more muffin recipes? Try these banana blueberry muffins that are perfect for every age!

Having cooked quinoa in the fridge is super helpful, it’s a staple I love to make in bulk. Use it as a side dish, add it to soups, salads, or make a healthy breakfast. This healthy apple breakfast recipe is very filling and full of plant protein, fiber, healthy fats, vitamins, and nutrients.

Get recipe at Maria Ushakova

Get recipe at Homemade And Yummy

Get recipe at 2 Cookin Mamas

Get recipe at Queenslee Appetit

The apple maple syrup on these pancakes are fantastic. Even the sleepiest person in the house will wake up to eat them!

Get recipe at Cooking On The Front Burner

Southern fried apples are cooked in a cast iron skillet with brown sugar, butter, and cinnamon syrup. Serve for breakfast or alongside sous vide pork for supper.

Get recipe at Syrup and Biscuits

Stewed cinnamon apples are made with just three ingredients. Try mixing them into greek yogurt, ice cream or serving them on vanilla cheesecake.

Get recipe at Cook It Real Good

Ground turkey meets apple breakfast recipe in this hash. It’s a savory, sweet dish that can be made in one pan. Simple cooking is often the best!

Get recipe at Eat Beautiful

Delicata squash and a bunch of other seasonal ingredients come together in this apple breakfast recipe. It’s an easy apple casserole to feed a crowd.

Get recipe at Eat Beautiful

This apple cinnamon french toast casserole is bursting with the flavors of fall. Pieces of apple and soft bread are slathered in a sweet maple glaze in this decadent dish.

Get recipe at Allergy Free Alaska

This apple cookie recipe is prepared on the sweeter side for breakfast and have hints of bacon.

Get recipe at 2 Cookin Mamas

See this recipe for the best scrambled eggs.

Want an easy apple breakfast recipe you can freeze? Yes! This recipe with baked apple oatmeal cups is easy to make ahead.

Get recipe at Carmy

Start off a crisp cool morning than with pre-made overnight oats. They sit all night in the fridge, and are ready to heat and eat in the morning.

Get recipe at Crowded Kitchen

Apple and honey oat scones are fluffy and moist. Perfect for a quick grab and go breakfast or to enjoy an afternoon tea or coffee. This apple breakfast recipe is perfect for a weekend brunch, too.

Get recipe at My Kitchen Love

Love the idea of homemade scones on this marble serving board.

Get recipe at Spoonful Of Flavor

Apple pumpkin pie baked oatmeal is an easy, hearty breakfast option for on the go or to make for a crowd. This fall baked oatmeal will have your whole kitchen smelling like fall.

Love Fall? See my list of what to do in Portland in the Fall.

Let me know when you try one of these apple breakfast recipes! I love seeing photos of your food! Don’t forget to tag me @sipbitego on Instagram. 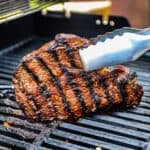 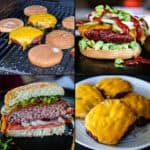